Setting up a Cushcraft R8 Antenna 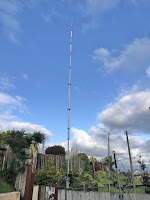 I’ve had my general ham license since Oct. 2017 and have been experimenting AND learning a lot about antennas, RF noise, etc. ever since.  I would say that 90% of my HF work is when I am on a mountain top, portable, doing Summits On The Air (SOTA).  One of the fun things about SOTA is that most mountaintops are RF quiet and, of course, the antenna performs really well up there.  (note: click on pictures for larger)

Although my home VHF/UHF stations is awesome, my home HF station really sucks RF noise wise.  I love the 7300 radio but like any urban location, there is a lot of RF  around me.  In addition, I don’t have enough open space to setup dipoles any larger than 20 m.  I’ve setup a few in the backyard and have even made a couple.  When i’m done experimenting, I always go back to the portable Chameleon vertical that I use to take on SOTA hikes.  It’s multi-band 6, 10, 20, 40 (and a little 80)  and works OK but I know it’s not that great and it’s a bit frail to leave outside.  In addition, there wasn’t a whole lot of room to put radials.  I had a few funky radials hanging down from it and it was kind of ghetto but it did get out.

I wanted to be able to chase other SOTA operators from home on occasion, especially when I can’t get out of the house due to weather.  Also, since I’m working from home right now, I’d like to be able to chase other SOTA operators at lunch time.  Of Course there is the other goofing around as well.  Given my constraints, I settled on a vertical antenna, and after a little research the Cushcraft R8.  It has pretty good reviews but some reviewers did receive antennas that need a bit to tweaking to get them assembled.  I’ve run into this myself in the past, having to re-tap the screw holes on arrow antennas. 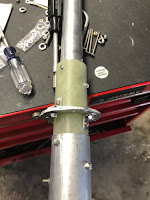 The antenna assembly went without a hitch.  There must be close to 200 pieces to this thing so it takes a while to assemble.  The instructions were clear to me and I never ran into an issue where I had to drill out a messed up hole or something.  There is a problem with the bottom thread on the mast for the feed line housing but I think I’m the one that buggered it due to the soft aluminium. .  Once assembled it seemed pretty sturdy which other hams have attested to.

I purchased the cushcraft tilting base since I’ll tilt it over in the side yard when it’s windy and or I’m not using it. There’s another reason to do this as well.  Read on...

I beat a 2 inch chain link fence post into the ground and then mounted the tilt base and then the antenna.  That was the easy part.  Concrete really isn’t necessary and I wanted to be able to move it if I changed my mind.  The recommendation from Cushcraft is to put the antenna up 10 feet, but doing that would make tilting it very difficult the way I had it setup.  The only real issue I had mounting the antenna to the bracket was that they don’t leave you much room between the junction box and the bottom of the antenna.  The U-clamp ends up pretty close to the edge the way I have it now.  I may add another clamp in the future some how. 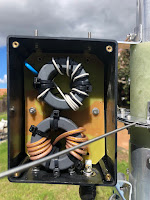 The last part of the installation was to tune the 6 meter and 40 meter bands.  I tackled 40 first.  This step required that I tilt the antenna down and adjust a tuning stub at the top of the antenna and tilt it back up.  If I hadn’t had it on a tilt-base, this would have been a huge pain in the ass!  As it is, I can make small adjustments myself in about two minutes.  It took me a lot of trial and error to get it tuned.  I had my RigExpert antenna analyzer attached at the feed point, I would tilt up, sweep, drop it, and then tune some more.  I made a couple more adjustments after the feedline from the shack was attached and weatherproofed.  I got lucky and the 6 m band was fine where it was.

I’m happy with the current setup for now.   I can use the whole portion of the bands, so, mission accomplished.  Sure, the resonant point of 4 is pretty narrow (see the sweeps below),  but usage tests show it to work from coast to coast in the US.

I’m a bit surprised that there are a lot of extra screws left... hopefully that is on purpose :) 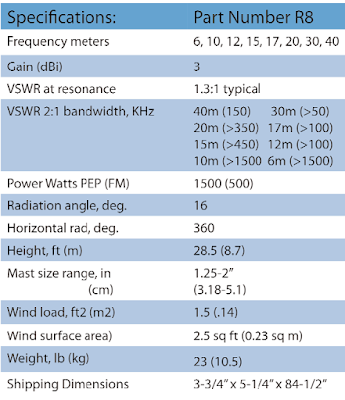 NOTES:  I think its a 100 feet long RG8 COAX to the Antenna.  There is a lot extra by the antenna as I used to change antennas quite often and move them around in the backyard. This is more of a permanent install.

I am on sort of a hill with a view to the east west.
The radials are 5 feet off the ground.  Cushcraft recommends 10 feet high. 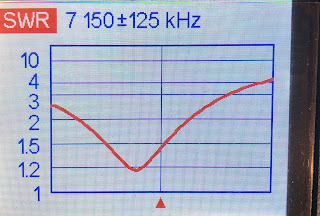 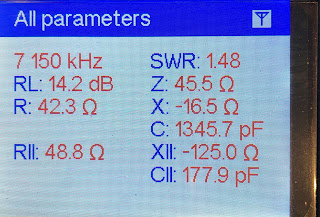 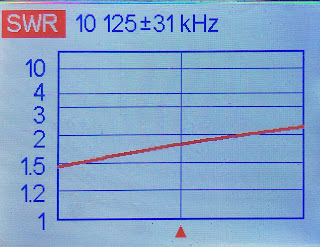 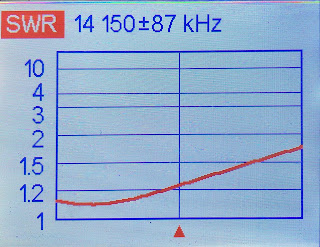 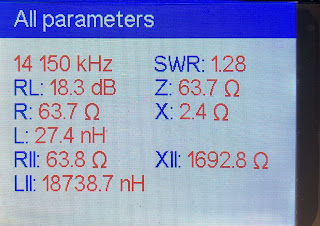 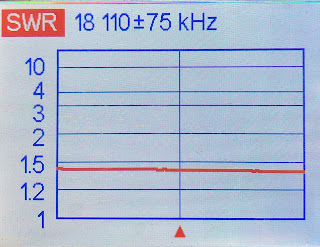 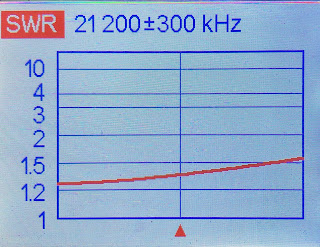 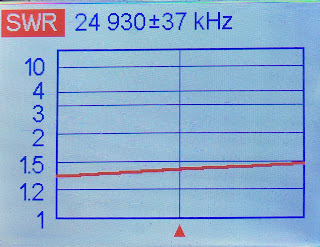 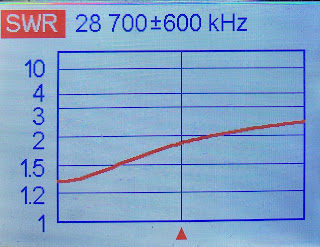 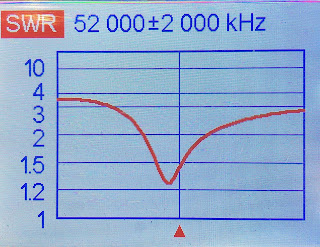 I’m still testing the antenna but it seems to perform quite a bit better than the Chameleon.  It’s designed to sit outside where the Chameleon really isn’t designed for long term deployment.  I will say the Chameleon matching unit doesn’t show a day of age and the only issue that I had when taking it down was that the collapsable poles were fused together due to corrosion which was probably impacting performance.  The Cushcraft is sturdy and the SWR sweeps on each of the bands shows that it’s definitely tunable on my icom 7300.  I’ll use 20 & 40 meter bands the most, but there’s a lot of chasing on 30 as well.  Although 40 m is narrow, and I can tune it to the sweet spot that I like (which comes with a bit of fiddling).    So far, I’m too busy with work to chase during lunch.  Maybe I’ll get a chance tomorrow.

I’ll update this post when necessary in the future.