Sycuan Peak and Another Snake

I’ve done this peak before and had forgotten how eroded it was.  I had told someone that it would be good for mountain biking but no way would you want to do this one.  After being surprised by last week’s rattlesnake, I was on the lookout.  I’m not sure that would do me any good as the species we have in this area are the Red Diamond rattlers and they really blend in.


I was about a third of the way up to the summit when I ran across a rattlesnake in the shade.  He let me know he was there and I gave him plenty of space.  I turned around my GoPro camera this time and took some video and included an enlargement of the little guy above.  (click for larger) 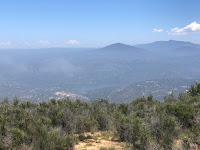 The trail / road is very wide so I would be able to see any snakes that decide not to warn me.  Once on top, the antenna setup should have been easy but during this procedure I got a piece of a wood james in between two extensions.  I had to take the pushup pole apart and figure out a way to get it unjammed out.

Once setup, I saw that Amy, AG7GP, was on a summit.  I was able to get a summit-to-summit with her pretty quickly and she had a nice signal from her summit in Oregon.  I also noticed that everyone’s favorite Kansas chasers, Gary and Martha were on a summit.  I tried to contact them but I couldn’t hear anything.  I moved on and spotted myself on 20m and had a huge pileup.  My CW (morse) skills were shitty but I made it work.  I did use SSB for chasers that don’t know CW, and worked some local stations with my handie held on FM 2m.

Before I shutdown, I was able to work John, ZL1BYZ, in Australia on the 17 meter band so that sorta makes up for a tough day on the summit.

The trip down was uneventful, and there was a nice breeze out of the west to keep things cool for a while.  I got my fix for SOTA and radio, as best I could and all in all, it was a nice day.