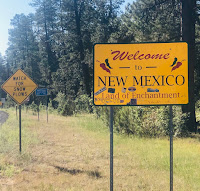 I’ve had my eye on a summit in New Mexico that had not been “activated” yet for a while.  “Not activated” means that no other SOTA operator has gone up there yet with a radio and submitted their contacts, so I get to be “First Activator” (FA).  It’s kinda cool in that your name is listed first and is always shown at the “first”.  This will be the fifth FA for me.  The peak doesn’t have a name so the person that setup the peaks for this area just gave it a number, 8961 (which is normally the elevation of the peak).  It SOTA designation is W5N/AP-015.  Check it out, you’ll see my call sign listed as the first activator (it’s all about pumping up my fragile ego :).
(Click on images for larger) 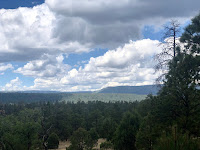 I spent some time looking at the summit in Alltrails.com and building a chart (HERE) to do this expedition.  Although I charted a road that ended .5 miles from the summit, I was ready to hike further if the road didn’t work out, you just never know.  Turns out, the road worked out better than expected.  I saw a road on the satellite overlay and did go up that but only about 100 yards.  It was a pretty crappy road and I didn’t want to push my luck and get stuck out there.  I saw two vehicles on the 10 miles of dirt road I was on so flagging someone down to pull me out would be a nonstarter.  I was happy to have AWD as I needed it in one spot and it came in handy backing the car up off the road just in case someone came by.  I could easily reach the South Mountain repeater so I could have radioed for help (no cell service up there).  I also could send SMS via my satellite communicator and of course relay messages to people 100s of miles away via HF radio.

On the hike up,I  paralleled the road but in the forest.  At the saddle I hiked straight up to the top pretty much as charted, and as it turns out, a simple hike.  I only logged 1.25 miles up and back but it was very enjoyable hiking in the forest.  It was extremely try and the sky way trying to squeeze out a bit of rain, but I only got a couple of sprinkles.  The monsoons are almost here so rain coming soon.

Once on top, I setup so that I could sit under a pine tree.  Just as I sat down, the clouds came in and it was absolutely perfect weather.  I had put an alert out on sotawatch.org, so when I started calling CQ using morse code, a network of skimmers picked me up and software went to work creating a “spot” for me on sotawatch.  The contacts came pretty fast once I was spotted.  Although I decoded most of the calls the first time, I was just a tad rusty at morse as I have slacked off the practice.  My sending improved after about about 20 minutes.  Sloppy at times.  I logged 36 contacts on 20m and 40m.  I tried 60m but got nothing.  The hike back to the car was delightful and after dropping my gar in the back, I sat on a log and meditated for a while.

The drive back passed right by another SOTA summit on the way back to Luna, NM.  It didn’t look like it would rain so I decided to go for it.  I was the first activator on that summit last year, W5N/AP-035, and nobody has been up there since (with a radio anyways).  It was partly cloudy but I didn’t see any thunderstorms when I got to the top.  It was cooler up there than the last time I was there.  I remembered it being more of a pain to hike up there last year.  It was probably because I was packing at-least 9 more pounds of gear (I was using a 100W radio then) and I needlessly hiked over a little rocky summit next to it.  It was less than a half-mile hike from where I parked and about 157 fee of elevation gain.  The activation zone is a mound of loose rock and dirt mountain capped with a rock top.  The tippy-top is too small an area to setup, so, like last year, I setup about 20 ft from the top.

There are some very large transmission lines next to the mountain offering up plenty of radio frequency noise.  It boosted the noise floor 2 to 3 S-units on the meter so I’m sure I missed some contacts that were down in that noise.  I didn’t log as many contacts on that summit but plenty to get full points.

When I got home, I noticed that I fat fingered some of the calls in my logging program.  I fixed a couple and tossed one out.

It was a nice day to be out on a summit, sitting in the shade and working stations all over the US and Hawaii.  The drive back to the cabin was relaxing and after eating a big sandwich and taking a shower, I took a nap while a bit of light rain pattered on the tin roof. 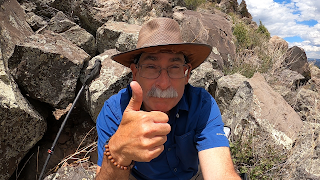