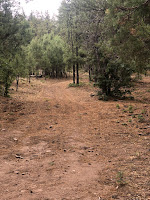 I was chatting Andrew, KD5ZZK, who is familiar with a lot of the SOTA summits around Catron County New Mexico.  New Mexico state line is about 3 miles from my cabin, and as I looked at those summits Monday afternoon, it struck me that I could pop over there and activate one.

Prairie Point Peak (W5N/AP-031) is a “drive up” that isn’t that far from another no named peak that is actually on the other side of a canyon, W5N/AP-024.  You could actually do both of them easily in one day.  The drive over to the turnoff is about 30 minutes from my cabin, just past Luna, New Mexico.  I might have been able to drive all the way to the top but I got to a sketchy point on a very old unimproved road that I didn’t feel like getting stuck or tearing out my muffler.  I really didn’t mind parking and walking the rest of the way anyway.


It was overcast with scattered clouds that were close to being big enough to produce rain but there’s just not enough moisture in the air.  It’s pretty country but extremely dry right now, so the monsoons can’t start soon enough.  It was about 1.25 miles to the top.  Setup was uneventful and I was on the air in about 10 minutes. 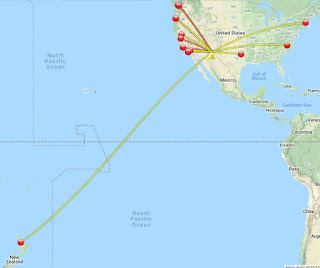 Monday activations are definitely slower and late afternoons are kinda unexpected by chasers so the combo made for a very slow roll of contacts.  Although the solar conditions aren't creating the best conditions for hams, I was able to work a station in New Zealand.  I made 15 contacts on 40 and 20 meter and was thinking of trying some other bands when I noticed the time on my watch.  I wanted to get home by 5 and it was almost 4pm... Geez time flies when you’re having fun.

I still needed to break the shack down and get back to the car which was over a mile away.  I did a “range walk” trying to makeup some time.  I got back to the car by 4:30, tossed my pack in the back and started down, slowly, as I navigated the large rocks and ditches in the road, then I looked at the clock in the car.  WTF, it’s only 3:40PM.  My Apple Watch and phone detected that we were in New Mexico, which is an hour later an Arizona this time of year.  This is an example of technology being a little too smart.

Getting back to the cabin, popping open a beer, and putting my feet up while on the front porch was a nice ending to the day, as always.  I’m looking forward to the big trek up Mount Baldy tomorrow.  It’s a long one to an area that I’ve never seen before.  It should provide some great views.

One side note.  When I did my pre-flight planning, the road to the peak didn't show up on the Alltrails base map.  It is charted on old USGS charts but that overlay isn't available anymore.  I'm having a word with Alltrails about this.  :)