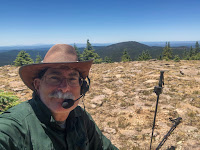 I had been looking forward to hiking up Mount Baldy, W7A/AE-004, for a month now.  It’s not too far from my cabin and the reviews say it’s awesome.  I didn’t realize what a cool hike this was or I would have done it a LOT sooner.  It was an epic day on the mountain for sure.

I got up at about 5AM to be on the road by 5:30.  I wanted to be at the trailhead by shortly after 6AM so that I could beat any possible thunderstorms that would develop.  The monsoons haven’t started yet but when they do, we get some massive thunderstorms and they form in that area by 1100 or noon.  I didn’t want to be caught on top of the mountain and be the tallest thing there.  Today, the forecast was for dry conditions but you never know in this area.
(click on images for larger)

I didn’t retract the gear until about 5:45 because I hadn’t made my lunch or provisioned my pack, and I wanted to get a good breakfast go power me up for the 7.25 mile hike up.

I took the Big Lake road from Alpine which is completely paved now.  I think the drive time was about 40 minutes.  I was contemplating taking the West Baldy trail instead of the East Baldy trail as it might touch the Apache Indian reservation wilderness area which is currently closed due to COVID.  I hadn’t been on either trail but the West Baldy trail is 1 mile longer according to the signs and 2 miles longer when I charted it on Alltrails.com (double that for the round trip). 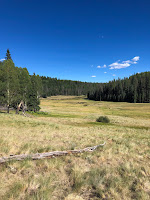 I saw some cars parked at the East Baldy trailhead so I stopped by.  There was a group forming in the parking lot and they mentioned that there were no issues with this trail hitting the Apache Tribal land and people had been using it all weekend.  They did mention that you couldn’t go to the actual high point because it’s on the reservation, which is closed.  If it weren’t closed, you’d still need a permit to enter.  I was aware of this and I was told that as long as you stayed on the loop that wraps around and connects to the West Baldy trail I would be fine.  Also there was supposed to be a sign at 7 mi indicating the boundary.

Hearing this I unloaded my gear and headed up.  My plan was to take the East Baldy trail to the north side where the topo indicated a gentle climb to the summit that was completely within the Apache-Sitgreaves National forest (see image to the right).  I was the first one on the trail today and it would be good to put some distance between me and the group that was forming. 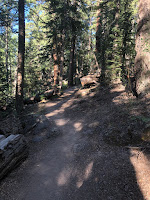 The hike started out in spectacular fashion, winding up a small valley and then into the forest where there is a small creek flowing.  The predicted elevation gain was only 2,100 feet, so it was going to be a gentle climb all the way.  The forest was dense, with tall ponderosa, aspen, oak and ferns lining the trail.  It was probably the most interesting hike I’d ever been on, mainly because of all the changes in scenery.  Although the trail was hard packed dirt, for the most part, it wasn’t covered in rocks so you could amble along and look at the scenery without tripping onto your face.  This part of Arizona is very volcanic.  There were spots where you cross what looks like a small lava flows, and the rock formations look like they were poured from a giant hot lava gun.

As the trail wrapped around Mount Thomas, the vegetation changed a bit.  A large number of the pine trees in in the depression to the north of Mount Thomas were dead and I’m not sure why.  It could have been a bad bark beetle infestation.  When there is a drought, trees have a hard time defending themselves. 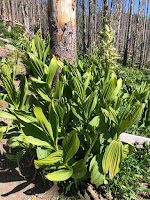 As the trail turns north under Baldy, there are quite a few trees over the trail that haven't been cleared.  I think it’s been a while since there was any trail maintenance up here.   There are fewer trees here and the area is covered in what looks like False Hellebore, a very poisonous plant.  At the other end of the trail where it meets the West Baldy trail the forest turns back to a thick growth of pine and aspen.

When I got to the point where I would turn and head up, I thought there might be a trail since it would be optimal given the terrain.  I didn’t see a trail, so I bushwhacked into the forest about 100 yards and came out on the trail that was there all along.  On the way down I realized the branch to this trail was a bit obscured by a bunch of stuff piled right where you would turn.  It’s a well used trail but not charted on Alltrails or the US TOPO charts but you can see it on the satellite view.  No big deal.  The green line on this chart is the area that I’m talking about.  There was still a patch of snow up there so of course I had to put my boots in it so that I could say I had to hike through the snow.  :)

The top is bald but is lined with trees on the east side.  This is the second highest peak in Arizona at 11,400 to Humphries 12,635 feet.  I actually hiked the third highest, Escudilla Mountain in June, which is 10,900 feet.  The view to the southwest was incredible.  I was wearing a light breathable long-sleeve Columbia shirt with a long sleeve outer shirt on top.  I was starting to get warm but I was perfectly dressed for the summit with very light winds. 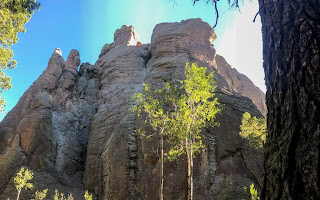 I found a small dead tree to lash my pushup pole to with the K6ARK wonder antenna attached.  I then made a chair out of a pile of rocks padded with my fleece and a puffy jacket I keep in my pack.  I left my chair at the car to shed some weight for the longer hike.   I was in the sun but perfectly comfortable.  My operating position setup was perfect.  I had a tiny bit of cell service where the data would work for a few seconds and then stop.  I had posted an alert on Sotawatch.org, so as soon as I started sending “CQ CQ CQ N1CLC N1CLC” the skimmers in combination with  RBNHOLE picked me up and created a spot on sotawatch.org letting chasers know I was there.  This is one of the big advantages of learning morse code (or as we call it CW). 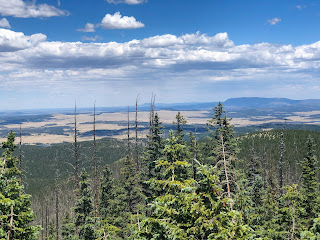 My first contact was KI6KU who must have an alert setup to spot me because he was calling me within a minute of my being picked up by RBN.  The contacts rolled in slowly allowing me to log contacts at a comfortable pace.  At one point, a text message did make it’s way to me and it was Charlie, NJ7V asking if I would try to work him on 60m.  He’s in the Phoenix area, which is too close for 20 or 40 meter.  I dialed in the freq he gave me and we quickly made contact.  I think I got two other stations on 60m (5 mhz) as well.  I later talked to Charlie using my hand-held radio via a repeater network that goes into Phoenix area.  I worked contacts on 40m, and 18m,  as well. 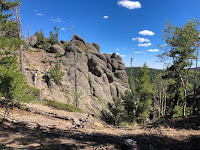 When I finallyI did get a short burst of data to my phone, I saw that there was a station working a SOTA summit in Washington state.  It was my CW instructor Tim, W7EEE, whom I evidently inspired to take up the SOTA hobby.  Tim was on Wilderness Peak, W7W/KG-132, just east of Renton, Washington.  He lives in the area so he was probably wanting to grab a quick summit.  It was a difficult copy but we did it.  I’d been wanting to catch Tim on a summit for a while and this was the perfect day to do it.  You can check his BLOG entry about our contact HERE.

There were a total of two people that walked passed me while I was on the summit.  One was a school teacher who was very interested in what I was doing and wanted to know more about it. I gave him my hobby business card with a link to my web sight.  He was a real nice guy.  Who knows, maybe I inspired another person to try this nutty hobby. 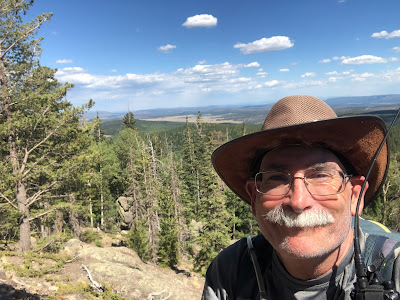 I used my Inreach satellite communicator to spot myself on 20m for some side-band (voice) contacts.  I only got one.  That was a bit surprising.  If it had been the weekend there would have been a lot more.  There weren’t many other summits active which meant my “chasing othr operators on summits was a nogo so I took a break and had my sandwich.  After lunch I grabbed a few more contacts and packed up.

As I packed up, I decided that this was a  perfect SOTA activation.  Now that I knew there was a trail down the mountain that connected to the main trails, there was no bushwhacking involved.  My new boots fit perfectly and weren’t cramping my toes, all my radios performed flawlessly, the antenna setup was perfect, and the trails and scenery were some of the best I’ve ever been on.  The hike down was nice but at time monotonous because the mystery had been revealed on the way up.  There were some places that I stopped to take in the different perspectives and lighting while I snapped a few pictures.  When my odometer ticked over 10 miles, my feet started to ache.  I don’t think it’s a function of my footwear, just old feet.  As I got closer to the parking lot I ran into a few hikers that seemed to be trying to get just a few miles out and back before the day ended. 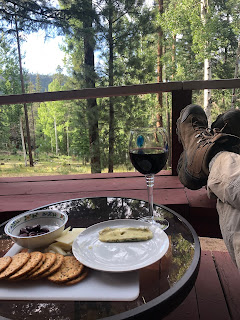 I got home just a little after 5PM, so it was a long day at the SOTA office. What better way to top off the day than with a sundowner on my deck taking in the quaking aspen,  sipping wine and listening to the breeze as it slipped through the pines, the geese honking at the pond, and an elk bugling in the distance. Some days, it just all comes together.