Today’s SOTA activation is part of “SoCal SOTAFest 2020”.  A group of hams, including myself, had been planning this for a while.  The idea is to get as many of us on a summit as possible to enable a whole bunch of summit-to-summit contacts and have fun.  As word got out, a lot of other SOTA operators took advantage of this as well.  A group up in Oregon and Washington were on the air and a Colorado group called the 14’ers had scheduled to have an event of their own on the same day.

If you want more info on the event, checkout socalsota.com.  That will bring you to a mailing list site that we use to communicate.  The group also hosts a zoom meeting ever two weeks.  It's a great bunch of hams, some new at SOTA and some that have been doing it for a long time. 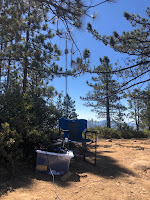 I decided to head up to Black Mountain, the one behind Ramona, CA.  It’s at 4000 feet and has a road all the way to the top.  My expedition up there last year was in a bit of rain and I slid into a rock that I didn’t clear, but I protected the car using the muffler.  Today’s trip was clear and going to be a bit warm.

Because it was a “drive-up” I brought a 100w radio, extra antennas, a 50w VHF radio and a couple of antennas for VHF along with a large tri-pod mast.  I brought a directional antenna but never mounted it.  I used my omni directional ground plane antenna on a 20’ tripod mast and it worked fine.  In retrospect, I’m glad I didn’t mount the yagi.  The wind came up later in the day and blew it over the VHF antenna tripod mast.  That would have wrecked my yagi.  Note to self: Always secure the mast :)  I put some sort of cover over the two radios to keep the sun from baking them and causing a thermal shutdown.

I spent the first part of my activation chasing operators on other summits.  Adam, K6ARK, popped up on my hamalert so he was first.  At one point, I joined Josh, WU7H, and Darryl, WW7D on a frequency they were using from a Washington summit.  We sorta did a joint activation with Josh or Darryl taking summit to summit calls and chaser calls and then directing them to contact me on the same frequency.  I had a really strong signal both ways with the OR team and it was a lot of fun. 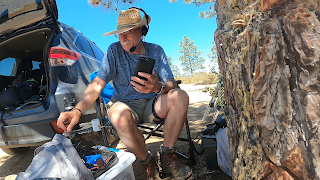 My VHF station with a mobile radio plugged into a portable battery and hooked to my Arrow ground plane antenna was covering an area from the Mexico border to northern Los Angeles.  The only issue I had was that I think I misconfigured the radio for the “party line” that we had designated because I never was able to contact anybody on it.  Next year I’ll do something a little different to ensure that doesn’t happen again.

I had made about 20 hf contacts and a few on VHF when John, K6MXA called me to tell me that I was telling people the wrong summit designator.  My spot went out correctly when I did spot because computers with GPS get it right every time :).  No problem, I fixed my log and I would email the first 20 or so contacts to let them know of the change if they didn’t catch it. 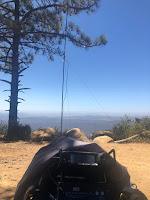 I ended the day with 81 contacts in the log and 23 summit-to-summit contacts.  A few of them are duplicates but overall I netted quite a catch.  I’d say the RF fishing went well.  I was hoping for some DX but I didn’t get up there early enough and didn’t stay long enough.  I had a lot of fun and no damage to the muffler this trip.  That’s a good thing.

I did shoot some video so if what I have in the can is good, you’ll be seeing a video shortly. 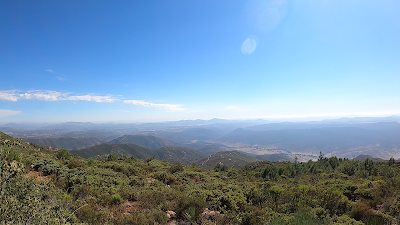