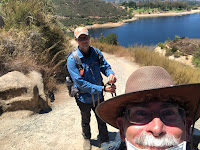 For today’s hike, I joined Jacob, W6RWS, for a joint activation to Mt. Woodson.  I’ve been up to Woodson, not far from my house, a couple times before but I’ve always taken the road from the north side.  When Jacob recommended that we hike from Poweway Lake, I jumped at the chance.  I’ve never done that route and was looking forward to getting my body moving after sitting in the chair all week.

The plan was to meet at the lake at 0700.  I was running about 10 minutes behind and Jacob so he was ready when I got there.  The route would be about 3.5 miles to the summit.  I wasn’t prepared for the number of people that we would see on this trail.  I don’t think I’ve ever done a hike on a trail that was this busy.  At the top there is a rock called potato chip rock which is a great for pictures because it looks like you are out on a cliff in mid air so that’s a big draw.  We were both wearing masks when we came up on people, but hiking with a mask is not my favorite thing to do. 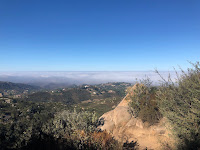 The hike was filled with what seemed like a lot of false indicators that we were almost at the top.  This area is dry and the trail is hardpan on rock.  As things heated up the hike started to become a slog.

Once on top, there was the usual line to get a picture on the rock.  Jacob and I setup in a quiet area very near the summit and got to work.  Jacob decided to go with a rollup jpole on VHF.  He new Yaesu FT3D was de-sensing due to all of the local RF but his Kenwood and my Anytone 878 worked fine.  That was a bit of a surprised about the Yaesu given that it’s a top flight radio. 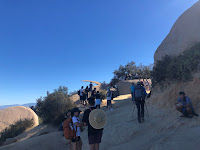 I broke out the KX2 and the K6ARK random wire antenna and hoped to get some CW contacts.  There was a ham on the next summit over from us on Iron Mountain, Christopher, N3XUL and he was running a HT hooked into a portable beam antenna, a 3 element Arrow Yagi.  I’ve run with the same setup in the past and it works pretty well.  He was pulling in a lot of contacts.

Mt. Woodson is packed with Antennas and RF equipment, all of which need to be cooled so it as a lot of AC units and therefore was a RF noise sierra sierra.  While Jacob worked a bunch of stations on VHF, I started pulling in CW contacts on 20 meter.  My first 4 contacts were CW and when the chaser dried up, I decided to do some chasing.  I caught Rex, Ke6MT, on a summit north-west of Susanville, CA.  and then worked a station on a summit near Flagstaff, Arizona on sideband, something that I didn’t think I could do given the RF noise here  but I had him loud and clear.  We were both running KX2 radios at 10 watts.  Once I was done with HF, I pulled in one more VHF summit-to-summit in an operator on Sycuan Peak, one that I’ve done before. 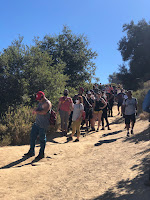 I closed the logbook on 16 contacts and packed up and we headed back the 3.5 miles to the car.  It was up to about 85+ degrees  by then and a bit of a slog getting back.  I was surprised at the number of people starting the hike during the hottest part of the day.  Sure, it’s only 3.5 miles but it has over 2,000 feet of elevation gain.  All-in-all, a good hike & ham day.

Because I just didn’t get enough, I saw that Josh, WU7H, another slack buddy, was on a summit in Washington called Chinook Peak.  I worked him from my home station.  He posted a picture that was absolutely stunning.  It’s a great example of why we do SOTA.

Here's a recording of my QSO with Rex, KE6MT

Chinook Peak by Josh, WU7H who was also doing SOTA.  WOW, what a view! 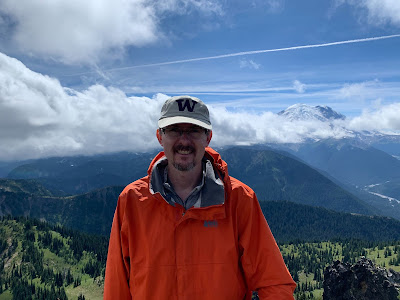 Josh, WU7H, on his summit