A friend of mine was planning a SOTA activation of Fox Mtn in New Mexico which made me think of doing it also.  I wanted to try something new but I also wanted to get at least one hike this weekend.  I thought Fox in New Mexico would be good but it is an almost drive up summit with a lookout tower on it.  As luck would have it, right next to Fox is another summit, Gallo Peak, that looked like a nice hike and it’s close enough to where I could probably fit both summits into this expedition.
(Click on images for larter) 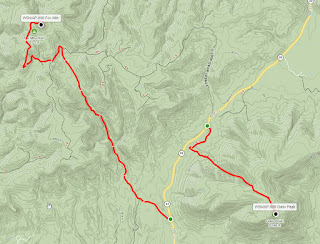 After looking at AllTrails.com and Gaiagps.com, I charted a route up to a dirt road where I would start about a 2 mile hike to the summit of Gallo Peak.  The launch point was about an 1:20 from my summer house in the mountains north-east Arizona.  The drive over would take me through Reserve then Apache Creek where you turn North.  The turnoff to the dirt road was about 15 miles from Apache Creek and was pretty well hidden from the highway.  I drove right past the road, turn then turned around and only by looking carefully could I even see it.  It’s not heavily used and the entrance was well covered in grass.  I was able to drive almost all the way to the tank charted on this map before the road exceeded my desire to push the limits of the vehicle.  I didn’t want to slide into a ditch, become high centered, and get stuck. 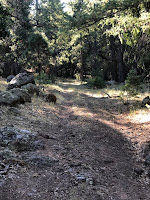 I was very surprised that the Jeep trail I was on actually continued all the way up the valley where it came out onto some forest service roads on top.  I started out at about 8,000 feet and I had arrived on the trail at about 0930 New Mexico time so the air was still pretty cool.  The Jeep trail was lined with Pine and oak and having a trail meant I wouldn’t have to be climbing over trees and rock.  As the sun raked the terrain from the east it really made for a stunning hike.  The first mile is moderately steep and then almost flattens out with a small incline to the summit at the end.  There were actually old roads all the way to the top.  And a road that went east and west that I didn’t see on the maps (more on that later).  The final, very old road to the top had been blocked off for what looked like many years.  The entire hike was really beautiful.

As I setup on the summit high point at about 9,000 feet, Dale, AA7OY called me via the Alpine EARS VHF repeater.  The repeater is 33.4 miles from the summit and I had Dale full quieting.  Perfect signal.  I setup the K6ARK multi-band antenna that I’ve been using for quite a while and when I went to use the automatic antenna tuner to tune it up on a 14mHz, it wouldn’t tune.  I suspected there was a problem.  I checked the connection and then tried to tune up a frequency used by FT8.  My radio was deaf.   I pulled that antenna down and switched to my LNR Endfedz MTR antenna and I was back in business.  The K6ARK antenna will have to go into sickbay I guess.  I’m glad I had a backup because this would have been an abrupt end since a 2M simplex activation up here in the middle of nowhere would have been a nonstarter.

My operating position was under a massive pine tree with plenty of shade.  I was able to run my antenna coax to a branch and then drop it down to the radio.  I set myself up with a nice view, had a snack, and got to work on the radio.

I placed an alert on SotaWatch before I left in case I didn’t have cell data service because I can use CW to spot myself using RBNHole.  On Gallow, I didn’t have AT&T cell service but the Verizon MiFi unit was working.  I started calling CQ and let RBNhole create my spot.  Once spotted, I was rolling through the contacts.  KX0R called me from a Colorado summit for a summit to summit (S2S) and then I did a bit of chasing as well.  I actually got 2 or three S2S contacts on sideband on this trip which is always fun.  There were some small cloud buildups that I could see and I figured I better de-summit and head over to Fox mountain before it rained.  It didn’t really look like it was going to rain and if it did, it would be a quick shower.  I had 30 contacts in the log when I packed up and I had a lot of fun.

The hike down was as nice as the hike up.  The temperature warmed just a tad but not by much.  I was surprised I could still use my HT to hit the Alpine repeater as I was hiking down the valley.  My signal must have been bouncing all round the mountains to hit the repeater.  Although my HT wasn’t doing the best getting into the repeater, the mobile in my car had no problem.  It’s fun to test the repeaters around here since there’s no cell service in the valleys of these mountains.  I heard one bit of thunder as I got back to the car to head out and was hopeful I could activate Fox in time.

The drive to the turnoff to Fox mountain is only a mile or two up the highway.  I could see some small cells building over the mountains to the north so I thought I might be cutting the activation short due to weather.  My plan was to drive to the top, check the weather, mainly for thunderstorms, and then possibly wait it out if needed. 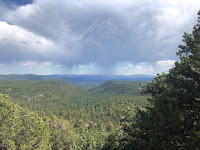 The road up was passable using two wheel drive vehicles with a little clearance.  The gate to the lookout, located about 0.4 miles from the top, was closed.  The lookout tower itself was closed but there was no indication that you couldn’t hike up.  The hike up the road to the summit was pretty simple.  There’s a steel lookout tower up there and on a little high point of ground was a fence post.  There was a bit of rain about 2 or 3 miles to the west but no real lightning to be seen or heard.  It was blowing about 10 kts, probably from the rain.  It looked like it might stay to the west of me so I got to work getting an antenna up in the air. 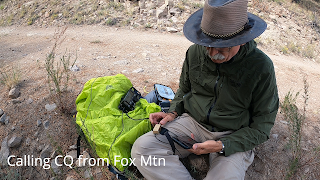 I lashed my pushup pole to the post and hoisted the antenna.  I was a bit nervous given the proximity of the cell that was dumping rain and there’s always the threat of lightning.  The antenna went up pretty quickly and as I picked up the end of the antenna with the connector to start rolling it out, I was getting some static discharges / shocks.  There seemed to be a bit of buzzing on the wire as it discharged into the ground.  That definitely isn’t a good sign, so I quickly took the antenna down and got the hell off the summit.  I didn’t want to be too close to the lookout tower if it got struck by lightning.  I went down the road a bit but still in the activation zone, put on my rain jacket and the rain cover on my pack and sat on the side of the road and ate my sandwich watching the cell to the west of me.  I was expecting to get drenched as the storm moved through but that never happened.  I got a bit of a sprinkle but the storm stayed to the west and moved north of me.  Once the storm was clear, I setup the antenna where I was and then asked my Slack buddies for a quick four contacts in case the storm changed directions. 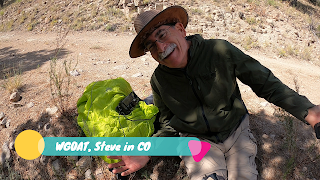 My first contact was Josh, WU7H, near Seattle and then shortly after that, my spot showed up on SotaWatch and I had a huge pileup of callers.  I had 4 contacts to get the points needed for full activation in 6 minutes and a total of 24 contacts in less than 30 minutes.  The pileup was a bit crazy.  WG0AT called but I had a hard time ensuring it was him because people just kept calling on top of him.  My last contact on 14 MHz was ZL2IFB, Gary in New Zealand so I was happy with the LNR antenna.  Gary was a tough copy as the band would drop out after he got to ZL2.  We worked it out and I got him in the log.  There weren’t any other stations on summits at this point that I could chase so I packed up and headed home.

Gallo Peak and Fox Mountain make for a perfect double given their proximity  Today was filled with great hiking, beautiful country, made a bunch of contacts, and I didn’t see a sole

When I got home, I checked the maps again for the roads that I saw near Gallo Peak.  If I had turned on the USGS layer on either of the mapping sites I had, I would have seen them charted and could have possibly taken a different route.  I have no idea what those road conditions were but if they are passable, they would put you within a mile of the summit.  No big one though.  When I do this one again, I’ll probably follow the same route or if I try the other approach, I’ll know that this one is available. 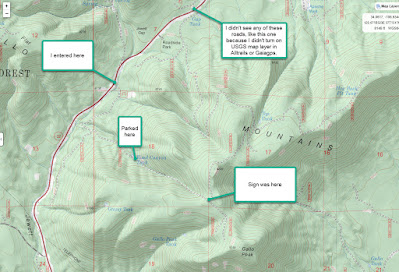