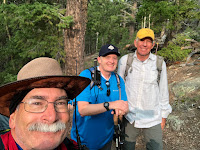 When I finished hiking Mount Baldy a couple months ago I couldn’t wait to go back.   When I mentioned it to Dale, AA7OY and Charlie, N7JV, they were all in.  Both were as excited as I was.  I didn’t do the loop last time because I didn’t want to bother with the cross trail or hitch hiking back to the car and I had heard that it was difficult due to lack of trail maintenance.  I really wanted to do the loop on this trip and after looking at the trail reviews from July onward, it sounded like someone may have gone up there with a chainsaw and did some trail maintenance.  When I mentioned doing the loop with the crew they were all for it.  So it was on, the Tres Cabezas would ride again (or activate a mountain again).

Charlie wanted to get an early start so that we could beat any weather that might come in and he had to get back down to Mesa, AZ afterward.  0530 was definitely early.  There was ground fog on the high plain leading up to the trailhead making the conditions IMC on the approach.  When I met Dale and Charlie at the East Baldy trailhead at 0530, it was 30f, dark, and cold.  Dale and I drove the 3.1 miles to drop my car off at the West Baldy Trail.  We were on the trail at about 0600 local and making good progress.  I left some stuff at the house and brought my camera.  It turned out to be a hazy day from the California fires.  The Santa Ana winds from the east blew the smoke out into the ocean and it had hitched a ride to Arizona via a weak low pressure zone.

All of us enjoyed the beautiful country and varied landscapes.  Once on top, we agreed on who would run what bands, spread out, and setup our stations.  Charlie had a huge pileup on 20 m right after he was spotted and landed a contact with Danny in Belgium.  Dale was struggling on 30m until he was spotted and then rapidly started filling his logbook.  I wouldn’t say 40m was all that great.  I pulled in a few contacts, then did a little chasing of other stations on summits and then switched to 20m when Charlie was done.  I made 14 total contacts, 6 of which were summit-to-summit contacts.  I was stoked to get Gary (W0MNA), and Martha (W0ERI) on a “summit to summit” (S2S) since I have them in my log over 100 times but never S2S.  They are prolific chasers from their home station.  I was able to get a S2S with Steve, WG0AT while he was on a Colorado summit. 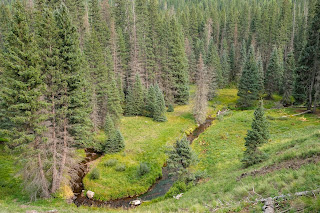 We were probably on the mountain for two hours having fun before de-summiting.  Everyone was looking forward to the West Baldy trail and it didn’t disappoint.  The top portion goes through what was a large dieoff of pine.  I not sure what the cause was but I’m guessing bark beetle.  As we descended further it started to green up and it looked like someone dropped seeds from the sky because there were loads of small pine trees that were all about the same size.  The further down we went the more beautiful the trail was, greener and lush. About half way down, the west fork of the Colorado river comes up close to the trail and rewards us with some really spectacular views as it serpentines down along the trail.  I would have loved to have stopped and taken my boots off for a little dip into the river.  Charlie had a four hour drive ahead of him and it wasn’t wise to make him any later than necessary.

I gotta say this is probably the best hike I’ve had all year.  The weather was absolutely perfect, cool, with overcast skies (hazy smoke from the fire in California).  I can’t wait to do the loop again.