I traveled up to Seattle to visit my son who just moved there.  Juan’s got an awesome little place and getting in the Seattle city groove.  I had given Josh, WU7H, a heads up that I was coming and was hoping to join him on an activation.  I met Josh via the hobby and he’s a member of the SOTA slack group that I hang out at.  He lives in the Seattle area and has been doing SOTA for a long time and very familiar with the area.  He’s chased me a ton this year and we’ve gotten a lot of summit to summit (S2S) contacts.  Josh activates a lot with Darryl, another prolific activator and S2S junkie. Normally, if Josh or Darryl works you S2S, the other will be right behind him.  I’m hoping that Darryl will be able to join as well.  Josh originally chose a peak that would have some awesome views but the road into the area was closed so he chose a summit North East of Seattle, about 2 hours from where I was.  I was really looking forward to it. 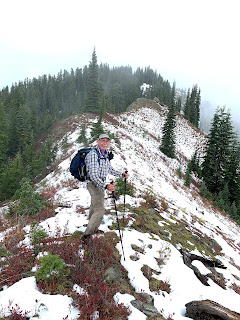 Josh setup a rendezvous location and from there we drove to the trailhead of Mount Sawyer.  As a bonus, Darryl WW7D was able to join us as well.   Once at the trailhead, Darryl took the lead.  It’s a dense forest, something I expected given the amount of rainfall they have, and there is a trail all the way up to Sawyer.  The higher we got the more snow we got into.  By the time we were at the summit, we were in a constant four inches of snow.

Darryl and Josh normally setup one station and then share it.  Their modus operandi is to do a bunch of chasing before they spot themselves.  Josh calls it stealth mode.  I setup my station anyway because I wanted to try an updated antenna from Adam, K6ARK.  My previous random wire pulled the center conductor loose from the unan and Adam hooked me up with a new model.  It has a little bit bigger toroid but Adam thinks it may be a tad more efficient.

The summit was very small so we were a bit too close to each other to split bands.  We used Darryl’s station to chase some other summits for some S2S points as well as using Josh’s HT to get a few VHF S2S contacts.  I did use my station to get a few S2S contacts just to test it out and it worked perfectly.  We then spotted on 20 & 40 and reeled in a few more contacts.  It was pretty chaotic running between stations, chasing other summits, etc but it was a lot of fun.  Josh and Darryl have a system, helping each other spot other summits, and working VHF in parallel.  They’ve been doing this for a while now so they have it down. 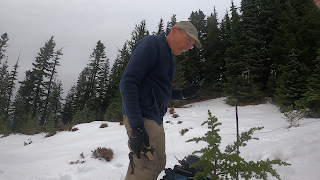 A first for me is a standing activation...  On the first summit, I stood in the snow and I held my radio putting a little tension on the antenna wire, as well as my phone for logging.  I used my right hand to hammer out some CW using the paddles strapped to my leg.  On the second summit was able to set my gear down on my pack but it was still a standing activation.

Once we worked down the pileups that were calling us, we packed up and headed down, with Darryl leading the way.  Once we made it back to the main trail that could take us to the East Tonga Ridge high point, we had a decision to make, do East Tonga or another summit, or head back.  Darryl needed just a few more points to make “double goat” and we decided East Tonga, which would give us the higher probability of success given the time of day. 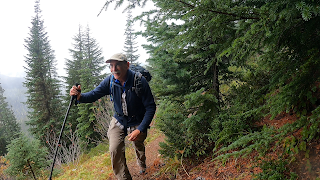 Darryl mentioned that there would be some bushwhacking since there’s no trail to the high point.  Bushwhacking here is very unlike the bushwhacks I’ve done in the Arizona forests given the dense forest.  It turned out that to be more challenging than I expected.  It was beautiful forest, dense and difficult.  This area has this sort of branch on the ground that is slick as snot because there is no bark and everything is wet.  That, combined with a few inches of snow and it was pretty challenging to stay up at times.  I probably went down three times.  Near the top, we ventured a bit south and the last 100 yards we had to exercise a lot of caution or end up rolling down the hill. 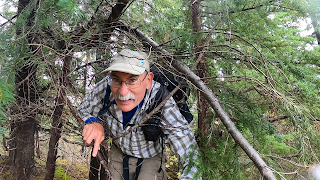 The hike to the second peak took a lot longer than I expected.  The summit had about eight inches of snow, no wind, so it wasn’t that cold.   I wanted to test the K6ARK antenna some more so I quickly setup my station.  The sun was about to set so this activation needed to be quick.  None of us wanted to be bushwhacking in the dark so our objective was to get the minimum contacts for an activation with points and then get down the mountain to the main trail before dark.  By the time my antenna was up, Darryl and Josh had their four contacts using Josh’s hand-held via VHF.  I was able to contact two of those operators on VHF and then started pounding out CQ on my rig on the 20 meter band.  My first HF contact was K6HPX in Tucson, and the second was ZL1BYZ in New Zealand.  Well, the antenna works :)  I had four contacts and there wasn’t anyone else waiting to contact me so I quickly packed up and we desummited.  We took a slightly different path at the top and then followed the ridge the way we came up.  It was a bit easier but slick.  Darryl was now a double Mountain Goat as he was pushed over 2,000 activator points. 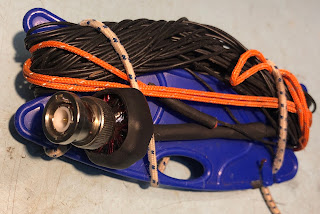 We got to the main trail with daylight to spare.  The headlamps came out for the last 15 or 20 minutes of the hike.  The clouds had settled onto the mountain, my glasses were fogging up a bit and it was an adventure.  I led the way back on the trail and pushed hard wanting to avoid running with a head lamp.  I didn’t bring a sandwich with me so I was starting to bonk once we got back to the car.  We’d been on the mountain since about 0930 this morning and it was now around 1800 and dark... pitch black actually.

All three of us needed something to eat so we stopped at a local pub on the way through Skykomish.  We sat outside to exercise COVID safety as best we could.  We had some adult beverages and fish & chips.  It was bar quality food, nothing special.  I had a fish sandwich, which is just the fish from the fish and chips fryer tossed on a bun.  Comical. 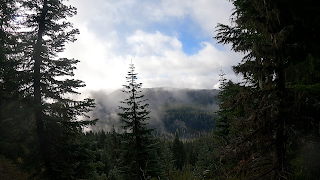 Activating with Josh and Darryl was a blast.  Bushwhacking always results in more energy expended but when you add in slick ground due to the local vegetation and snow, so it takes a lot more energy for sure.  I was sore for several days after our adventure.  Sitting in the office chair for two weeks eliminates any muscle I’ve built up so after this hike, I was feeling it.  This was an epic expedition and I can’t wait for the next one with the Washington crew.