I’ve had my eye on this summit for a while but never went after it.  After a couple of other hams summited and activated, I decided to get after it.  It’s a simple and short hike, and it’s near my house between Iron Mountain and Mount Woodson.  Today’s summit has no name so they call it “2703”, most likely the elevation of the summit.  There is iron ore on one side of the trail and the other is granite.  It’s interesting country here, mostly granite boulders though.  The summit is just a tad funky, in that the high points are on top of massive granite rocks.  My first contacts were summit-to-summit with someone on Viejas Mtn and then Mike on Sheephead Mtn.  I found a spot between a couple of massive rocks and setup the K6ARK random wire antenna, did a little chasing, and spotted on 17m.  I racked up some contacts there, did some chasing for some more summit-to-summit points and then setup my LNR endfedz antenna to show the difference between the two antennas on video below. 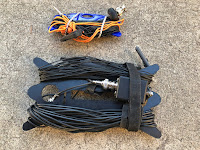 I had a pretty good pileup on 20m which included a Christian in France.  Once I worked the pileup down I got a couple more summit-to-summit contacts on my HT.  One contact was Chris K6XUL on Gordon point and another operators on Mt. Helix.  Chris gave us a trail report for Gordon point, a summit that Drew and I wanted to bike up on the 26th.  Today’s weather was low 70s and crystal clear, perfect SOTA day.

My hiking partner, Drew (N7DA) failed on the HF setup due to a bum battery.  I had one for him to use, but by the time I found out, he’d already committed to just using 2m on his HT.

The nice thing about this hike is that there were just a few people that we passed on the trail.  Had we been on Iron Mtn. Or Woodson, it would have been bumper to bumper people and dogs.  We closed out the activation, and I had a pretty good haul, 44 contacts and ~11 summit to summit contacts. It was good propagation today from France to New Zealand.