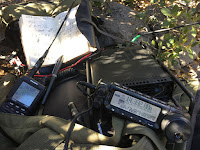 Today’s destination was Sheephead Mountain (W6/SD-020 - Sheephead Mountain)... again.  I was the first to activate this mountain back in January and although the hike was tough, I enjoyed it.
(See the previous post on Sheephead to get the details on the Sheephead adventure).

This is the last weekend before the Grand Canyon hike and I really didn’t want to stomp around on the hills near here.  Now that I know the trail conditions of Sheephead, I thought I would do it again.  I like being in the pines at the beginning of the hike and I’ve come to appreciate the spongy dirt on the trail.  This is in contrast to the Iron Mountain hike, and a few others around here where it is like walking on granite. 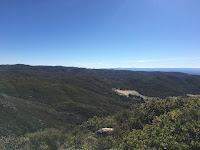 I forgot about was how steep some of the sections of the main ascent are.  In one spot, I needed to sidestep up the hill.  I almost forgot my poles again today and I really would have been kicking myself as it’s almost mandatory with a 40 lb pack on.  I had a couple of sticks last time... I’m not sure how one does it with a 40 lb pack and no sticks.  In some places, the chaparral encroaches on the path to a point you have to fight a bit to get through but it’s not like a full bushwhack.  The path is still good, and the final section requires a crawl over a bolder.   I did summit with only minor loss of blood.

Setup was easy, as the fencepost in the rocks was still there.  I strapped my mast onto that and was up in running within 15 minutes.  The wind wasn’t blowing too hard and I setup my operating position down below the point out of the wind with a backrest.  I had a decent pileup of SOTA Chasers waiting to talk to me after spotted myself on the web site and wrapped up the radio portion of the expedition with a nice set of contacts.

I talked to two other activators, that were also sitting up on a summit so we talked summit-to-summit.  That was kinda cool.  One was in Washington on “W7W/WE-037 - Needham Hill”.  The other was on a hill south of LA, W6/SC-369 - Temple Hill.   The third was on “W4C/CM-068 - Bearwallow Mountain” in the Carolinas.  I need to remember to lookup other activators next time I’m on a summit but I’ll have to have a internet connection on my phone to see the “spots”.  I also had some good contacts near the east coast and 2 in Canada, Calgary, and Quebec.

On my way back to the car, I was surprised to see another hiker heading up.  He asked about Sheephead and I advised him to start looking for a good walking stick, he was going to need it.  I showed him the path on my phone and gave him some reference points and a lesson that I learned on the initial part of the trail.  I hope he found the trail and made it up.  He didn’t have a pack and was carrying a small bottle of water.  He looked prepared for the small undulating hills, not an assault on Sheephead :)