I wanted to get out and do a quick hike today and play radio.  I was thinking of going over to Twin Peaks and then heard a SOTA buddy, Jake (W6RWS), on the radio as he headed up to that very mountain.  If you remember, a couple of weeks ago, Jake, Adam & I went up to Morena Butte.  Adam jumped on the radio and answered Jake and then we talked about getting out there with Jake.  Adam and I decided to do a quick hike one up to Mt. Woodson, about 30 minutes from the house.
(click on photo for larger) 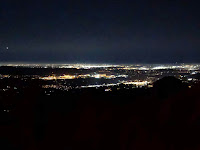 We headed up the mountain at a little after 5PM local as it started to cool off.  It’s a little over two miles on a paved road to the top, but steep.  We both bought our KX2 radios and it's always fun shooting the radio bull as we head up the mountain.

We split up at the top and setup.  Adam was pretty much at the top and I setup by Potato Chip Rock.  I put my LNR end fed antenna up about 20 feet on a pushup pole and then went over to the mountain and hiked up a bit, making it pretty much horizontal at the end of my very small feed-line.

The mountain is packed with RF equipment, repeaters of all sorts and lots of microwave gear and the usual cooling equipment and power lines, so its a noisy RF environment.

After some pictures and setup, I spotted myself on 20 meters, 14 MHz, but given the time of day, it was slow going.  My first contact was Gary (W0MNA) in OK.  He gave me a decent signal report and then I continued to call out for other chasers for a while hoping to attract a chaser or even someone dialing around the band or get spotted on an operator’s spectrum analyzer.  No joy.

I went over to 40 meters, 7 MHz, and spotted myslef there.  I called CQ for a while and just about the time I was going to give up, I got two contacts.  The first, Dmitry, N6DNM in Walnut Creek, I’ve contacted before.  The second was Michael, NW7E, someone who is very popular in my log book.  I called CQ on VHF using my hand-held and picked up Roy, KR6RG, and John, K6MXA.  I haven’t talked to John in a while so it was good to hear him. 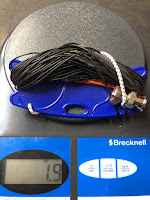 I dialed down to the CW portion of the 40 meter band and banged out CQ with my cool paddles mounted on my thigh.  I was spotted on  the reverse beacons in Canada and the US so I know I’m getting out there.  I know of one guy that tried to get me in San Diego but couldn’t hear me as my signal was launched above him.

I forgot to get some good pictures of the sunset but did get a cityscape pic.  All in all it was fun getting a quick summit in.

The real big news is that Adam gifted me a new antenna.  A custom antenna that he’s been building for himself and friends.  This is the lightest and most flexible (band wise) antenna in my collection.  Although it looks like a winder with a bunch of wire on it, f you look closely, Adam has soldered a mini transformer onto the connector.  This allows the antenna to be used on multiple bands.  I’m totally stoked to get this and can’t wait to try it out (adam actually did his activation with it).  For those of you wondering, Mini 9:1 unun feeding a 41 foot radiator and 17' counterpoise. KX2 can tune to ~1:1 on 60-10m. You might even get 80m in certain installations depending on the nature of the ground. 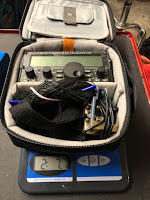 With the KX2, keyer, and case, my total radio loadout is about 2.5 lbs.  This is awesome!!!  I have a solution for my massive pushup pole but I need to do some testing before I rely on it in the field.

Thanks to the chasers out there that helped me activate Woodson tonight.