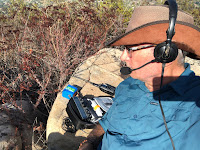 Did a quick hike up to Twin Peaks to get some exercise and test out my deployment of the K6ARK Spider Thread Antenna.  The hike was an easy one up to the summit and included a hilarious roll off a rock due to a stupid overcommitment on a step.  It was fairly hot today, about 80.  I was enjoyable to be 9 lbs lighter in the equipment department.  If I can keep the gut weight off, that would be awesome.

After setup, I reached out to the DMR group here in San Diego and asked if anyone wanted to try a simplex call over DMR.  AI6CX is always ready to help and W6CRC in Poway jumped in as well. 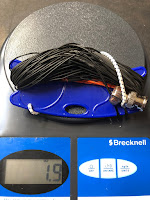 HF went well but it was slow going.  Sunday afternoon is always a little tough.  There’s no other activators out so I couldn’t chase.  W0MNA, Gary, and his wife W0ERI in OK picked up my spot right away (they are awesome).  I got a couple of contacts in Northern CA and OR.  I gave a shout out on 146.52 (the VHF National Calling Freq) but there were no takers.

The trip back to the car was a quick one.  A guy on the trail stopped me about the stuff sticking out of my pack and wanted to talk about ham radio for a while.  The public is always interested, and actually a little surprised that ham radio is still around, and in some cases a growing hobby.

I need to get a shorter pushup.  I’d like to have something a little shorter than what I’m carrying.