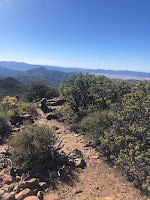 A fellow SOTA buddie, Jamie, N6JFD came in from out of town.  Adam and I both know Jamie and of course we had to get out and hit a summit together.  Given it’s thanksgiving weekend, we wanted to avoid some of the more popular hiking areas since they will be mob scene,  so we settled on Combs peak, W6/SD-011.  Combs peak is located just south of Anza and just north of Werner Springs.  I’ve done it before but not this year and Adam and Jamie have never done it.  It’s located just off the Pacific Crest Trail (PCT) and is a tad over 2 miles to the summit.  The elevation gain is 1000+ feet, with most of it in the last quarter mile.

I picked up Jamie and we headed out for a 1.5 hour drive to meet Adam at the trailhead.  The hike up is a pretty simple trek up the PCT and a left turn to head up to the summit.  On this last section, there is a lightly used tail to the summit but this is the steepest part of the hike. 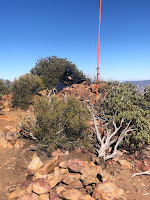 The summit & activation area is pretty small.  Adam brought a VHF Yagi antenna to work VHF stations and satellites.  A Yagi antenna looks like the old school TV antenna that your data put on the room and the three elements give it a more directional signal.  It’s an awesome K6ARK light weight design too.  Adam also uses it to bounce signals through some amateur radio satellites.  Normally repeaters aren’t allowed in SOTA but in this case they are.  You have to know when they will be coming up, where they will be and their path overhead so that you can follow them with the antenna. In addition, Adam tested VHF through his yagi and landed some VHF contacts in Yuma, Arizona!  Oh, and you do all of this while punching in the callsigns into your log.

I setup a HF station with my KX2 and an end-fed random wire.  Given the space, Jamie and I agreed to share my station and started with some chasing of operators on other summits.  When we find a station on a summit, we’d dial them in and then work them.  Jamie or I would contact them and then hand the paddles to the other person.  After I watched Josh and Darryl do this in Washington, we got the style down pretty quick.  In just a few minutes we had worked 4 summit-to-summit contacts and activated the peak we were on for points.

Later, I spotted myself on 20m to see if any chasers out there wanted points.  Also, I knew there were some other activators lurking out there who hadn’t spotted themselves yet (running cloaked).  Sure enough I was chased by N6AN and possibly one other that was on a summit.  I also logged quite a few contacts.  I turned the station over to Jamie who spotted on 40 I think.  Jamie was keen on trying to get a summit-to-summit with a station in Mexico.  After being very patient, he finally got him and then it was my turn.  It took a while as the guy was VERY popular but I finally landed a contact with him.  I think that was Jamie’s first XE station and a summit-to-summit to boot so we logged a DX summit to summit.  Jamie did a little research and found that XE1MYO, our contact in Mexico is the number one activator in the XE association and has the most S2S (let’s just say Mexico doesn’t have a lot of SOTA operators but I hope that changes).

Adam setup his linked dipole and worked a couple of bands on 100 watts (QRO) on side band (voice).  He landed quite a few contacts including a S2S that he let Jamie and I work as well.

We had a good time.  The weather was sunny but windy up at the top chilling us down pretty well.  The hike down was simple enough and if you can bolieve, I forgot to get a group picture.  Darn!