Today is my first real mountain bike (MTB) expedition to do Summits On The Air (SOTA).  I’ve done a test of the newly repaired bike to my test range, Black Mountain.  It’s by my house and the service road was a good test to ensure my MTB is ready to roll.  I converted an old Cannondale MTB that my neighbor had to an e-bike to use as a commuter bike for work.  I’ve put 8,000+ road miles on it since I’ve done the conversion but the bike was setup for road.  Because the shock in the front and the headset were shot, it was a real danger, so I couldn’t really use it off-road.  They no longer make the parts I needed for repair and I wanted to change it to a standard front end with normal fork shocks.  There is a bike mechanic in town who has converted my model of bike for others, so I took it over to Chainline Bikes in El Cajon 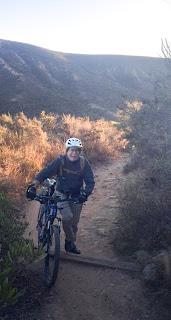 Today, Drew (N7DA) and I headed up to Cowles Mountain via a single track MTB trail that linked up to a service road from the south-east side of the mountain.  I have plenty of peddle power given the 1000 watt motor, but I have very little MTB skill if any, so when I saw the trail, I felt  this would be a challenge.  As it turned out, I was right.

On the trail, when hitting small stones and slowing, I’d basically fall over into the chaparral.  No injury or pain, just embarrassment.  My single biggest issue was that I was using clip-in pedals made for road biking and I couldn’t pull my feet out of the pedals quick enough, so over I’d go, and then was like a turtle on his back.  It was actually quite comical.  Drew, a more experienced mtb rider, did much better.  He was using flat pedals (without clips) so he wasn’t crashing.  The only advantage I had was pure power, just no control.  This trail was a bit more technical than either of us expected.

We walked & pushed our bikes most of the way up to the service road and from there, it was no problem.  For me, it was a quite enjoyable mile or so up the rest of the way.  I wasn’t in the best of biking shape since I hadn’t ridden in quite a while so having an e-bike was a huge help.

Once at the summit, Drew and I setup away from the busiest part of the summit.  I used the K6ARK random wire antenna with the KX2 and Drew used a small 1 watt kit radio, a precursor to the mountain topper by LNR along with a custom tuner and what I think is a linked dipole.  I ran “cloaked” (not spotted) for a while and chased operators on other summits.  I then spotted on 40m and made 7 or more contacts and made some more S2S contacts on 60m, 30m, and 17m.  We had quite a bit of fun. 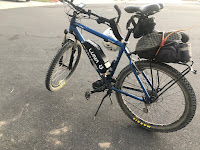 I managed 22 contacts, with five of those being summit to summit contacts.  Drew managed a good set of contacts including contacts to France and Australia.

There was no way I was going to ride down the MTB path as it was way too technical for my abilities.  We decided to take the service road to the street and then ride around to the vehicles.  There were no issues with the descent, which included a few stops to let the breaks cool.  It was a beautiful day for biking and doing a little SOTA in San Diego.  If I do this one again via MTB, it will definitely be up the service road.